The 1800’s saw a growing pressure upon road authorities to improve the surfaces of roads.

Cycling become a popular pastime by the mid-eighties, many cyclists belonged to The Road Improvement Association, consequently the improvement of roads was greatly needed. As the volume of such work increased Jesse Ellis took up road contracting with marked success. The organisation and supervision of these main road works were put on a more substantial footing, with the setting up of county councils by the Local Government Act, 1888. This increased the work available to contractors still further and Jesse Ellis was able to secure a useful proportion of it for his firm.

For a period of fifteen years he was responsible for the maintenance of the main road from Maidstone to Folkestone besides work for other authorities. There were 592 miles of main roads in Kent under the control of the County Council, all maintained by contract except for the 136 miles in East Kent division, which were looked after by Council employed labour. Kent County Council, on the whole, adopted a progressive stance on road improvements. In the year 1892-93 the average expenditure was £159-15shillings per mile, it will be seen that in an age where a man might live in some style and keep a carriage on £600 a year there was a large sum open to tenders in road maintenance.

Launching further a field from Kent, Jesse Ellis secured contracts for road works from the London Vestries. A contract of which he was especially proud was the renewal of the roadway, The Victoria Embankment in Westminster, undertaken in 1895. 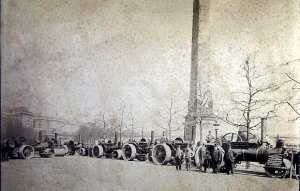 As an addition to his activities as a contractor for road works, Jesse Ellis had ragstone Quarries at Boughton Monchelsea, (south of Maidstone), providing ragstone for use in his own operations as a road contractor and also for sale to others. The Boughton ragstone was brought down to Sufferance Wharf by traction engine and trailer then transshipped there on to barges.